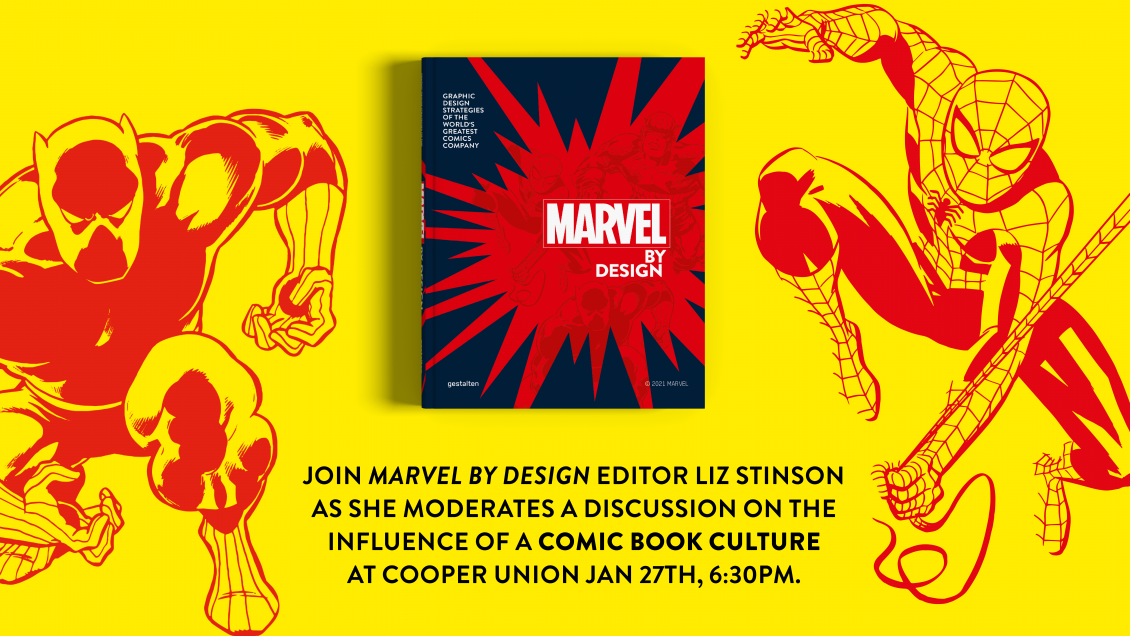 Join Liz Stinson, the editor of Marvel by Design, a new release by gestalten, as she moderates a discussion that will connect the dots between comic book culture and its undeniable influence in every creative field including the evolution of graphic design, editorial design, movies, and visual culture at large. Panelists include some of Marvel’s most renowned artists and graphic designers including School of Art Dean Mike Essl A’96, Chris Eliopoulos, and Paul Sahre.

This event will be held online via Zoom webinar. Registration required.

As one of the most recognizable brands in the world, Marvel has spent the last 80-plus years inspiring generations of creatives through its approach to visual storytelling. Marvel’s comic books, in particular, established a distinct graphic language that has found its way into mainstream culture, including 1960s Pop Art, and present-day digital culture, gaming, advertising, and more. Marvel by Design celebrates the company’s visual language with an in-depth exploration of the design process behind the brand’s most recognizable graphical elements including logos, covers, lettering, layout, and color palettes.

Mike Essl is an associate professor in graphic design and a former comic-book shop employee. Dean Essl has designed books about comics for Abrams, Chronicle Books, Rizzoli, and Titan. Essl’s work has been recognized by the AIGA and exhibited by the Smithsonian and MoMA.

Chris Eliopoulos has lettered thousands of Marvel comics. He’s also written and drawn Franklin Richards: Son of a Genius and Lockjaw and the Pet Avengers. He currently illustrates the Ordinary People Change the World book series and co-created “Xavier Riddle and the Secret Museum” on PBS Kids.

Paul Sahre is one of the most influential graphic designers working today. He has doggedly remained independent, operating his own practice since 1997. He is a frequent visual contributor to The New York Times, designed book covers for authors such as Chuck Klosterman, Malcolm Gladwell and Clarice Lispector, authored books (including his design memoir: Two Dimensional Man), and built and destroyed a life-sized monster truck hearse for the band They Might Be Giants. Sahre teaches graphic design at the School of Visual Arts in New York and lectures extensively all over the world.

Liz Stinson is a writer and editor covering the world of design. She is the executive editor of AIGA Eye on Design, and her writing has appeared in Wired, Fast Company, Architectural Digest, Curbed, Metropolis, and The Wall Street Journal Magazine among other publications.