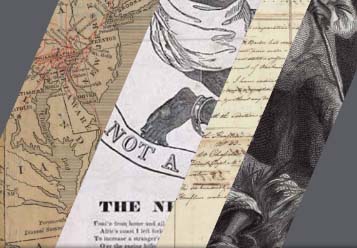 Subversion & The Art Of Slavery Abolition

Transatlantic slavery was devastatingly brutal in its utter disregard for human life. Across the Atlantic World, avaricious traders and enslavers ripped apart families and communities, callously murdering millions of people of African descent and legalizing the extraction of labor from the unwitting survivors. The United States was founded on the inalienable principles of equality, liberty, and democracy on the one hand, while the nation’s rise was enormously dependent on slavery speculation on the other. This inherent contradiction set the stage for centuries of political and philosophical conversations and unrest. While slaveholders and vigilantes threatened and attempted to control Black bodily autonomy, enslaved people and their allies artfully countered this malevolence via everyday and more formally coordinated types of resistance.

This exhibition highlights several of the ways that abolitionists engaged with the arts to agitate for enslaved people’s liberty in the eighteenth and nineteenth centuries. Though the major focus is on American (U.S.) and British efforts, abolitionism was transnational, dynamic, and controversial. Anti-slavery advocates immersed themselves in letter, pamphlet, and speech writing campaigns and founded newspapers, despite known and unknown dangers. Visual artists created illustrations, paintings, and photographs that featured the mundane yet absolutely reprehensible aspects of slavery to alert everyday citizens to the institution’s many horrors. Novels, slave narratives, poetry, and music were also significant and often encoded with insurgent messages that inspired the establishment of anti-slavery societies and the formation of one of the movement’s most subversive projects: The Underground Railroad. All of these strategies were profoundly necessary as activists rallied the public to agitate for the cause and urged governmental officials to abolish slavery. Abolitionist arts appealed to the public’s moral, religious, and political convictions, eventually yielding a robust stream of anti-slavery propaganda and radical acts that could not easily be ignored. In 1791, the abolitionist William Wilberforce gave a speech before the British House of Commons, declaring that great responsibility came along with the awareness of slavery’s cruelty. He ended his speech with the declaration, “You may choose to look the other way but you can never again say that you did not know.” This sentiment no doubt energized and emboldened abolitionists’ incredible displays of bravery, intellect, craft, and artfulness in the fight to end slavery.